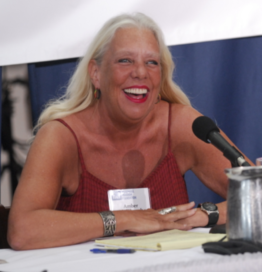 A well-known activist, artist, public intellectual and community organizer, Amber Hollibaugh was a founding member and formerly the Executive Director of Queers for Economic Justice (QEJ). Prior to that position, she held the positions of Chief Officer of Elder & LBTI Women’s Services at Howard Brown Health Center in Chicago, Senior Strategist for the National Gay and Lesbian Taskforce, and Director of National Initiatives at SAGE (Services and Advocacy for GLBT Elders). Earlier in her tenure she was SAGE’s Director of Education, Advocacy and Community Building. Before joining the staff of SAGE, she spent seven years at Gay Men’s Health Crisis (GMHC) as Founding Director of the Lesbian AIDS Project and subsequently as the National Director of Women’s Services. She had also been the Director of Education for the New York City Commission on Human Rights, AIDS Division. Amber is currently on the board of CLAGS (the Center for Lesbian & Gay Studies) and on the editorial board of GLQ: A Journal of Lesbian & Gay Studies.

She was a recipient of the Dr. Susan B. Love Award for Outstanding Achievement in Women’s Health. She is the author of My Dangerous Desires: A Queer Girl Dreaming Her Way Home (Duke University Press) and the director and co-producer of The Heart of the Matter, a documentary film focusing on women’s sexuality, denial and risk for HIV and AIDS. The film won the 1994 Sundance Film Festival Freedom of Expression award and premiered on PBS’s prestigious POV film series. She emphasizes the importance of looking at an issue through different lenses as well as the complexity of the intersections of race, class, gender, age and sexuality.