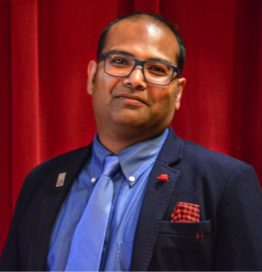 Dr. Debanuj DasGupta is Assistant Professor of Geography and Women’s, Gender, and Sexuality Studies at the University of Connecticut. His research and teaching focuses on feminist and queer geographies, transnationalism, and migrant justice.

He is currently working on a monograph length project that is tentatively titled, “Racial Regulations and Queer Claims to Livable Lives.” The monograph revisits the past three decades of the gay marriage movement, post 9/11 national security procedures, and queer immigrant right organizing in order to delineate the affective domains of neoliberal-biopolitics in the US. His second research project interrogates the convergence between Hindu right-wing politics (Hindutva), neoliberalism, and transgender politics in India. Along with Dr. Rohit K. DasGupta, Debanuj is the co-editor of the forthcoming anthology, “Queering Digital India: Activisms, Intimacies, and Subjectivities” (forthcoming from Edinburgh University Press). This is one of the first anthologies about digital technology and queer activism in India. Debanuj is a long time scholar activist, and over the past three decades has worked across diverse social justice movements in India and the US. In his spare time, Debanuj spends his time within spaces of healing and recovery.