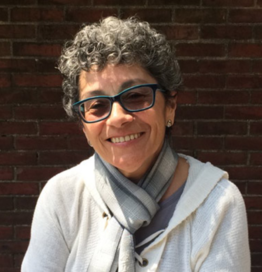 Katherine Acey is a Senior Activist Fellow at the Barnard Center for Research on Women. Katherine Acey comes to BCRW from time as the Executive Director of GRIOT Circle, a people of color LGBTQ elders organization based in Brooklyn, N.Y. From 1987 to 2010 Acey served as the Executive Director of Astraea Lesbian Foundation for Justice and holds the title of Executive Director Emeritus. Under her stewardship, Astraea established the nation’s first Lesbian Writers Fund in 1990, created the International Fund for Sexual Minorities in 1996—the only fund of its kind—and launched the US Movement Building Initiative in 2005 to support the leadership and vision of people of color LGBTQ organizations.

From 1982 to 1987, Acey served as the Associate Director of the North Star Fund in New York City, overseeing its grants and technical assistance programs and managing a donor portfolio. She helped create and shape the Women’s Funding Network in the mid 1980s serving on its first board and as Board chair. She is a founding member and past board chair of the Funders for Lesbian and Gay Issues and has served as a board or advisory member to countless organizations including: Women in the Arts, the Center for Anti-Violence Education, New York Women Against Rape, MADRE, Women Make Movies and the International Network of Women’s Funds. Acey is past chair of the National Executive Committee of the Palestine Solidarity Committee, and was a core member of the Arab Women’s Gathering Organizing Committee. She has served on the Human Rights Watch LGBT Program Advisory Committee and helped to establish the Global Philanthropy Project: Expanding Resources for LGBT People. Acey serves on the Boards of Political Research Associates, Center for Constitutional Rights and the Advisory Board of Open Society’s International Human Rights Initiative.

For her leadership in building a multi-cultural women’s funding movement, Acey was honored by the Women’s Funding Network with the Changing the Face of Philanthropy award. Other acknowledgements include: the Cross Cultural Black Women’s Studies Institute for International Women’s Leadership Award, the NYC National Organization for Women Susan B. Anthony Award, the Women & Philanthropy LEAD Award, the FEX Vision Award in Social Justice, the Lambda Legal Defense and Education Fund Liberty Award, the North Star Fund Social Justice Leader Award, the Brooklyn Lambda Award, and a Women eNews 21 Leaders for 21st Century nomination.