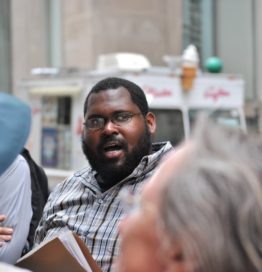 Lavelle Porter is an Assistant Professor of English at New York City College of Technology, CUNY.  He holds a B.A. in history from Morehouse College, and earned his Ph. D. in English from the CUNY Graduate Center in 2014.  He is a former employee of CLAGS (from 2003 to 2006).  His writing has appeared in venues such as The New Inquiry, African-American Intellectual History Society, Warscapes, Poetry Foundation and Callaloo.  He is currently working on a book titled The Blackademic Life: Academic Fiction, Higher Education and the Black Intellectual.