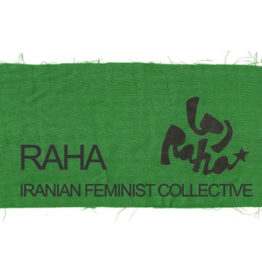 We are an NYC-based collective that started with a group of Iranian and Iranian-American women in New York City. Raha is open to people of all genders committed to working as a collective combating patriarchy both in our work and in our process. We work to raise awareness about movements for justice in Iran and the U.S. through internal education, creative messaging, solidarity actions and public education.

We seek to support the aspirations of the democratic movements in Iran while also opposing U.S. economic and military intervention. We also seek to counter misconceptions about Iran and what it means to be anti-imperialist. Understanding that patriarchy and militarism go hand in hand we seek to challenge the different ways they operate in both the U.S. and Iran.

We see this work as inextricably linked to a diverse range of grassroots movements for economic, racial, gender and sexual justice with which we seek to build alliances.

We believe that all genuine liberation comes from below.