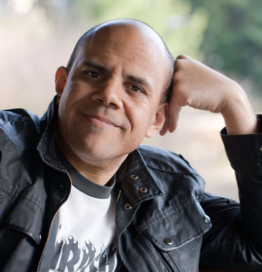 Steven W. Thrasher is Writer-At-Large and Senior Opinion Columnist at the Guardian US and a Henry M. MacCracken doctoral fellow in the department of Social and Cultural Analysis at New York University, where he is completing a PhD in American Studies. In 2016, Steven is among the top 10 most shared Guardian authors on Facebook; and, out of 12,000 writers who have written for the Guardian website since 2006, he is also among the top 10 recipients of reader comments so abusive they have to be deleted. As a Contributing Editor at BuzzFeed, Steven won the 2015 Al Neuharth Award for Innovation in Investigative Journalism for his story on Michael Johnson (“How College Wrestling Star ‘Tiger Mandingo’ Became An HIV Scapegoat”) from the Gannett Foundation and the National Lesbian and Gay Journalists Association (NLGJA). Steven has previously been awarded a Courage Award from the Anti-Violence Project, a James Aronson Award for Social Justice Journalism from Hunter College, and NLGJA’s 2012 Journalist of the Year Award for his writing in Out magazine, the Village Voice and the New York Times. Steven sits on the board of the American Sociological Association’s journal Contexts and has academic articles being published in the summer 2016 issues of that publication as well as in Radical History Review and the Journal of American History. Prior to working in journalism and academia, Steven worked on the TV show Saturday Night Live and the film of The Laramie Project, and he spent a year interviewing people for the NPR StoryCorps project. More recently, he wrote the liner notes for the Decca Records’ 2014 album Valentina Lisitsa Plays Philip Glass. Steven is on Twitter and Instagram.